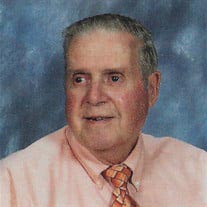 On Saturday, March 12, 2022 Curtis Hubert Linkous age 90 awoke as he always did giving thanks for another day. At 11:45 am he was happy to leave this world when the Lord called him into his eternal care with loved ones by his side.

Curtis was born May 16th 1931 to Fred & Cannie Linkous, he was a spirited young boy and as teen loved playing catcher on the Merrimac baseball team. He raced a 1936 Ford Coupe with the number “B29” at Victory Stadium in Roanoke. Curtis served in the National Guard in the 29th Infantry Division based out of fort Belvoir, VA. He worked in the Merrimac Coal Mines and then became a painter at Radford Army Ammunition Plant. After an early retirement he spent a lot of time going to Virginia Tech Hokie Football games & playing golf with his cherished friends. One of the most important things in Curtis’ life was his walk with the Lord, he was member of Merrimac Pentecostal Holiness Church and served as a Deacon and Sunday school Superintendent for many years.

The family will receive friends from 11:00 am to 1:00 pm on Tuesday, March 15th, 2022 at McCoy Funeral Home in Blacksburg and the funeral will follow at 1:00 pm conducted by Rev. Richard Hall, & Rev. Clayton Kipps, special speaker Kim Dix. Burial will be at Roselawn Memorial Gardens.