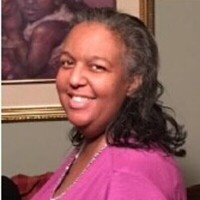 Veronica Turner Lewis’ genesis into this world was on July 25, 1967 in Baltimore Maryland where God anointed her as his chosen vessel to spread his love to everyone she met. Her Exodus was on Monday, January 18, 2021 surrounded by her loving family.

She accepted Christ at an early age and was a living epistle to be read among men. Everyone that knew her, would remark about her selfless, giving nature whereby she always put others before herself. Her elementary education began in Baltimore City Public Schools until her family transitioned to Hampton, VA where she continued her education and graduated from Kecoughtan High School. Subsequently, Veronica attended her beloved alma mater of James Madison University where she received a Bachelor of Science Degree in Psychology. Her insatiable desire for knowledge led her to complete a Master’s Degree in Industrial Organizational Psychology from Radford University. After completing her Master’s degree, she met the love of her life, S. Oliver Lewis, III. They were married on August 5, 1996. To this union was born a blessed and anointed child named Jera Miah Lewis.

Veronica served as the Assistant Director and Director of Student Support Services for 20 years until her retirement due to health related issues. Her leadership in the program afforded many low socioeconomic, first generation, and students with disabilities the support needed to not only graduate from college, but matriculate on to obtain Masters and Doctorate degrees.

There will be a drive thru visitation from 9 until 9:45 a.m. on Saturday, January 23, 2021 at Sunrise Burial Park in Radford. Graveside services will begin at 10 a.m. with Bishop Ronald Watson and Pastor Gary Hash officiating.

In lieu of flowers, please consider donations to the UVA Strickland Transplant Center.

The Lewis family is in the care of Mullins Funeral Home and Crematory in Radford, Virginia.