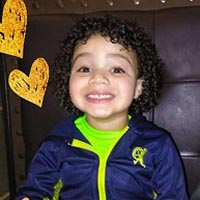 Kyrin Lamere Lewis, age 3 of Giles County, VA. went to be with the Lord on Sunday, February 25, 2018. Kyrin was born on August 20, 2014 in Radford Hospital and is a son of Antonio Lamar Lewis and Amber Renee Lucas.

He was preceded in death by his maternal grandmother, Anita Elizabeth Viars Lucas and special great aunt, Sandra V. Robertson.

Kyrin was a vibrant child, who put a smile on everybody’s face and was a bright light to those around him.

A celebration of Life will be held Saturday, March 3, 2018 at 12pm at the First Baptist Church in Pembroke, VA. with the Rev Dan Parks officiating with burial following in the Birchlawn Burial Park in Pearisburg. The family will receive friends at the church one hour before the service.

The family is being served by Givens Funeral Home in Pearisburg. Online condolences can be sent to the family at givensfuneralhome.com.