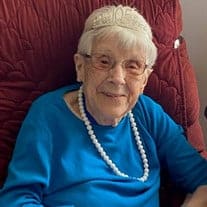 Bernadine married Ray Edwin Lester on October 10, 1934. In 1954 they moved with their three children from Pulaski to Christiansburg,
Virginia, where Bernadine lived until her death. A devoted mother and grandmother, Bernadine was an active member of St. Paul’s United Methodist Church, had visited 48 of the 50 states, and enjoyed socializing with her canasta club well into her 100s.

Bernadine was preceded in death by her parents; her sisters Gillie Moyers, Rena Sue Ellis, and Alberta Payne; her husband Ray “The Meanest Man in Christiansburg” Lester; her daughter Carol Lee Morrison (Tom) of Roanoke, Virginia and son Ray Edwin “Eddie” Lester, Jr. of Riner, Virginia; and Sandy Moyers of Pulaski, Virginia, a nephew to whom she was especially close.

The family thanks Kindred Hospice and the staff at Commonwealth Assisted Living (where Bernadine resided for 16 years) for their kindness and care.

A memorial service will be held at St. Paul’s United Methodist Church in Christiansburg at a date to be determined.