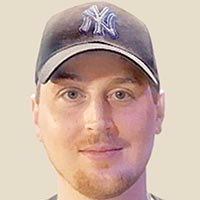 At a very young age Kristofer showed courage and bravery well beyond his years, as he endured two brain surgeries for a tumor that would ultimately be the catalyst of his death almost 30 years later. In life, he took his role as an older brother very seriously; he adored his sister and did anything he could for her.

He was an intuitive and mostly self-taught chef, who could gather random items from around the kitchen and create a stunning dish. He absolutely loved to cook for others or give advice over the phone to a frantic family member or friend experiencing a cooking emergency.

He was also an amazing artist with a creative mind that could build or draw whatever came to him. His passions included animal welfare, the environment, photography, hard rock music, cheering for the Yankees and Dolphins, and gaming with a network of genuine friends in the PUBG mobile community, who acknowledge his skill and camaraderie. To know him was to know devotion, selflessness, and empathy; he was a compassionate friend who was always willing to make time for others.

His bright blue eyes and ability to effortlessly bring joy and laughter will be remembered and missed. He loved without limits, gave without reservation, and leaves behind an impressive resumé of talents. Kristofer graduated from Pulaski County High School in 2004.