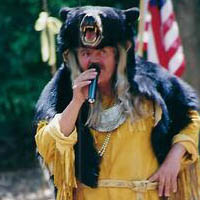 Garland Wayne Leeson, age 70 of Pulaski, left this earthly life on Monday, July 6, 2020, comfortably from his residence. He was born in Pulaski on Thursday, February 2, 1950 and was the son of the late Annie Lollie Leonard Leeson and Garnett Jefferson Leeson.

Garland went to Pulaski High School, and afterward spent three years in the United States Navy. Upon returning to his home-town, he joined his father and family in their family business on Robinson Tract Road, named the Virginia Wilbert Vault Company. His business helped in the final disposition of thousands of people in Pulaski County. Garland ran the company for many years and the company retired when Garland retired.

Garland yearned to be a part of and cherish his family’s American native heritage. After retirement, he rearranged his entire life, following the footsteps of his ancestors. He became, “Humble Bear”, and lived and breathed his ancestral lineage. Humble Bear witnessed many of his family leave this life to be with “Grandfather” in Heaven, including his son Garland Wayne Leeson, II or better known as “G”, his brother Garnett Jefferson “Jeff” Leeson, Jr. and his brother Samuel Thomas Leeson.

A private family gathering will be held at a later-date to celebrate his life.

Garland wishes to thank all who supported him and his family while walking this earth!