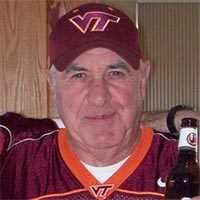 It is with great sadness that the family of Denis Lee announces his passing on August 3, 2019 at age 77 after a yearlong battle with leukemia.

He was born January 14, 1942 in Wigan, England, son of Wilfred and Annie Lee. As an adult, he and his family moved to the US and lived in Norfolk, Virginia before all settling in Blacksburg, Virginia.

He enjoyed soccer and was an avid fan of Manchester United and Wigan Athletic F.C. He and his daughter were also very enthusiastic supporters of the Dallas Cowboys which made for some interesting Sundays watching football with his sons, fans of the rival Washington Redskins.

Denis is survived by his loving wife of 55 years, Glennis; children Nigel (Chris), Erica, and Steven (Tina), all of Blacksburg, Virginia and sister, Mavis Smith of Billinge, England. He will be fondly remembered for his sense of humor by his six grandchildren, Rey, Jarryd, Michelle, Stephanie, Jake, Jayna, and Deven. He also leaves behind great-grandchildren, Kaylee and Sebastian as well as nieces, nephews and extended family and friends.

He was predeceased by his parents, Wilfred and Annie, and sister Martha Mae Charlson.

Family will receive friends at McCoy Funeral Home on Tuesday, August 6, 2019 at 5pm, followed by a service in the McCoy Chapel at 6pm with Pastor Kelly Shushok officiating.

In lieu of flowers, memorial donations in honor of Denis can be made to Good Samaritan Hospice of Roanoke (goodsamhospice.com) or the SECU Family House of Winston Salem (familyhousews.org/donate).