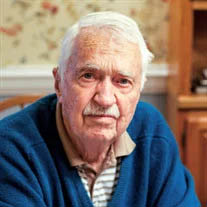 John Carver LeDoux, age 98, of Blacksburg, VA, died peacefully at home in the early morning hours of Tuesday, June 28, 2022. John (aka Jack) is preceded in death by his wife, Elizabeth LeDoux and sons John N. LeDoux and Jeffrey LeDoux.

Jack was born in Portland Oregon on May 18, 1924, to the late John Francis LeDoux and Edith Lilian LeDoux. He served in the United States Navy from 1943 to 1967, retiring with the rank of Commander. Later he served with the Nuclear Regulatory Commission and became Chief of the Training Division for NRC inspectors. In 1981 he accepted a professorship of engineering at Virginia Tech in Blacksburg, VA, retiring in 1994.

During his career he was a member of several engineering societies including serving as Session Chairman for two international symposia on the use of radioisotope generators. He made a trip to the South Pole, and he won the 1960 Toulmin Medal of the Society of American Military Engineers. In addition, he was awarded the Achievement Medal by the Secretary of the Navy. He had many other accomplishments throughout his long life, including authoring two books: his autobiography titled “LeDoux Vie, the Sweet Life of John C. LeDoux” and “What One Man Thinks.”

He married the love of his life, Betty LeDoux, on May 18, 1948, with whom he enjoyed a happy marriage for 62 years. He was dearly loved by his 8 children, 11 grandchildren and 15 great grandchildren.

Funeral services will be conducted on Sunday, July 10, 2022, at 2:00 pm in the McCoy Funeral Home in Blacksburg, VA, with Pastor Mitch Semones of Dwelling Place Christian Fellowship officiating. Interment will follow in the Westview Cemetery in Blacksburg, VA.