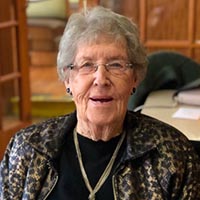 Esther Viola Robinson Leamnson, age 99 of Dublin, peacefully went to her heavenly home, Friday morning, March 5, 2021 at her son’s residence in Roanoke. She was born on November 10, 1921 in Johnson County, Indiana, and was the daughter of the late Beulah Homer Robinson and Ocie Robinson.

She was a long-time member of Community Christian Church in Dublin, where her husband served as minister, after helping start the church back in the 1960’s. Esther was always very active in the church there and always considered the members there a part of her extended family.

In addition to her parents, she was preceded in death by her husband, Jack Leamnson; her daughter, Diane Phipps; her brothers, Milton and Devon Robinson; her sisters, Harriet Botton, Violet Fleming, Verna Myers, Velda Williams, and Zelda Bess. She is survived by her son Mike and his wife Vickie; son-in-law WJ Phipps and wife Dot, grandchildren, Donna and Tommy Ratcliffe, Dortha and Dougie Irvin, Denise and Richie Webb, Michelle and JJ Burnett, Nikki and Adam Dunford, and Joshua and Kristin Leamnson; and great-grandchildren, Andra and Tanner Ratcliffe, Jessica & Jeremiah Irvin, Kaitlyn Webb, Mikayla and Reagan Heslep, Aiden Burnett, and Chloe Hopkins .

Funeral services will be held Tuesday March 9th at 11:30 am at Community Christian Church in Dublin, VA, with Ministers, David Eubanks, Mike Whitaker, and Ernie Depew officiating. Internment will be after the service at the Southwest Virginia Veterans Cemetery. The family will receive friends on Monday, March 8, from 6 to 8 pm at the church.

In lieu of flowers, memorial contributions may be made to the Jack and Esther Leamnson Scholarship Fund at Johnson University. CHECKS should be made payable to JOHNSON UNIVERSITY and mailed to 7900 Johnson Drive, Knoxville, TN 37998 with a note that it is in memory of Esther Leamnson. Contributions can also be made online at www.JohnsonU.edu/donate with a memorial designation.