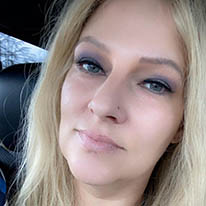 She left behind a hell of a lot of stuff to her sons who have no idea what to do with it. So, if you’re looking for dust bunnies in vintage bottles, an outdated computer, a blender oven (slightly used), an old bike with peg stands (she loved putting the pedal to the metal) or 1,000 cords that we aren’t sure what they’re used for… you should wait the appropriate amount of time and get in touch. Tomorrow would be fine.

However, this isn’t a pawn shop ad, but an obituary for a great woman, sister, daughter, aunt and friend born on March 27, 1982, in Blacksburg Virginia. She was preceded in death by Van Taylor (Mamaw) who spent many years raising her, two uncles, and other extended family she looked forward to meeting at the pearly gates. She leaves behind a crazy Appalachian family she was proud of including her Papaw Charlie Taylor who helped raise her, her love Juan Cascante, sister, Amanda Bush (Mike), sister, Danah Brummer (Tyson), sons, Omar, Solomon and Ulysses Lazo, father, Larry Taylor (Deborah), mother, Sally Bourne Taylor and brother, David Taylor. She was also the eccentric aunt and leaves behind many nieces and nephews along with comrades who she served alongside in the military and fellowshipped at the local VFW.

Bobbiejo, Bobbie and Bobs, as she was known, was world-renowned for her lack of patience, not holding back her opinions and knack for telling it as she saw it whether you wanted to hear it or not. She was passionate, tenacious, strong, witty, and gracious. Was it the school of tough youth or her service in the United States Army (particularly Operation Iraqi Freedom) that formed her grit and determination to blaze through the difficulties of life, we can’t say. You knew where you stood with her. She considered herself a realist and was fairly black or white, while oddly also playing devil’s advocate. She could talk your ear off and enjoyed talking as much on her terms as she loved the outdoors and trust us, she LOVED to steal away to the river or camping. Her motto through all of life’s circumstances was bloom where you are planted.

She was probably a decent cook when married to her children’s father but became proficient in drive through ordering and microwave meals after divorce. She believed in overcooking most things so you would never get sick because all bacteria would be nuked. Still, her kids seemed to think her dinner was gourmet and it made her heart happy if only the laughter because cooking was rare. Her boys were her greatest joy and loves of her life.

Her vocabulary was extensive and was known to include all the curse words. Yet, she pulled herself together when necessary, having served in several positions within the church and military to include Protestant Women of the Chapel chair, Family Readiness Group Leader and Jr. Vice Commander, District Adjutant and State Service Officer for the Veterans of Foreign Wars. She was particularly passionate about listening to and connecting empathetically with those veterans with PTSD. She loved the Lord and carried her favorite bible verse with her through the end, “Let us run with endurance the race that is set before us, fixing our eyes on Jesus, the author and perfecter of faith…” (Hebrews 12:1-2).

A memorial service will be held 3 p.m. Monday, June 27, 2022, at the Virginia Veterans Cemetery in Amelia, Va. Rather than flowers, please plant a tree and also consider gifting generously to the two charities that she was fond of, Camp Kesem at VCU at donate.kesem.org, and Metavivor at metavivor.org. You can also donate to the scholarship set up in her honor to further the education of Hopewell’s local children of veterans- VFW Post 637, Bobbiejo Lazo Scholarship, 1400 Lynchburg St., Hopewell, VA 23860. She loved Luke Bryan’s “Drink a Beer” and was known to enjoy a cold one herself so if you’d like, in her memory, watch the sunset disappear and drink a beer.