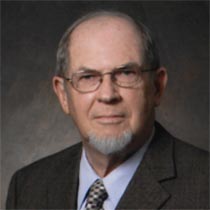 John William Layman, 84, of Blacksburg, Virginia, passed away peacefully at home with family on February 8, 2017, after battling kidney disease.

He was born in Troutville, Virginia, on January 27, 1933, to the late John Cline and Elsie Montgomery Layman. He lived in Rockbridge County, the Brownsburg and Raphine areas, during elementary school years.

After winning the Virginia Science Talent Search from Blacksburg High School in 1950 he graduated from Virginia Tech in 1954 with honors. He was one of the first “co-op” students, participating at the Naval Engineering Experiment Station, Annapolis, MD. He received his masters at the University of Virginia in 1956 and earned his doctorate in theoretical physics there in 1958.

He taught mathematics at Virginia Tech from 1958 until 1995, interrupted by a brief tenure as visiting professor at Bridgewater College. He was founding director for the Virginia Tech Regional Mathematics Contest. Over his career he taught virtually every course listed for the Tech Mathematics Department. He had an abiding interest in integer sequences, being one of the editors for an online journal related to the subject. He also wrote numerous computer programs for solving math problems.

He married Jane Watson Brugh of Troutville at Millcreek Baptist Church in 1961, on his birthday. They had four children. He was a devoted father and husband and enjoyed gardening, tennis, and projects with his family at his farm. He was an active member of Blacksburg Baptist Church and he faithfully served in the Interfaith Food Pantry. He enjoyed weekly lunches with his fellow math professor colleagues.

In lieu of flowers memorial donations may be made to the Interfaith Food Pantry, Blacksburg by mailing designated donations to New River Community Action, 1093 East Main Street, Radford, Virginia 24141 or to the scholarship fund he established at the Virginia Tech Mathematics Department through University Development.