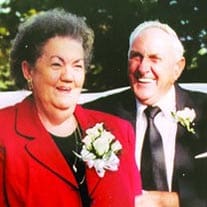 Hubert E. Lawrence, 92, passed away at his home surrounded by his family on November 11, 2021. Loving father, grandfather and great-grandfather. A man with a quick wit, a genuine smile and a good joke.

Born in Roanoke County, and became a lifelong resident of Montgomery County, living also in Elliston and Riner.

Elwood found the Lord at Glenvar Baptist Church, where he was an active member for twenty- two years. He also attended Auburn Baptist Church, Fellowship Baptist, the first meeting of Fellowship Baptist took place in his living room, and Faith Baptist. He later became a member of Blacksburg First Wesleyan Church where he remained until his passing. Elwood avidly attended services at every Church he attended. He was heartbroken when his health no longer allowed him to attend.

Mr. Lawrence started and ran a construction company for fifty years. He gave every customer his best work and a fair price. He built homes, churches, retail stores, factories, parsonages, fellowship halls and even a gymnasium. He spoke with pride of working with Jimmy at The Big Spring Flower mill, representing the third generation of the family to do so.

The family would like send special thanks to the caregivers who took care Elwood in the last days. Tracey, LaDonna and Angie. With special appreciation to Good Samaritan Hospice.

In lieu of flowers, the family asks for donations in Elwood’s name to the Riner Rescue Squad, who made many late-night stops at his house.

A viewing will be held 12 p.m. Sunday, November 14, 2021. Services will be held 1 p.m., at Horne Funeral Home, Christiansburg, Va., followed by a service with interment 2;30 p.m. at Roselawn Cemetery. Officiated by Pastor John Hopkins.