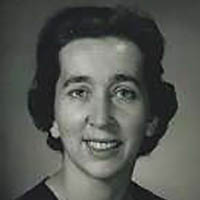 Marian Geraldine Law, 89, of Thunder Road, Pembroke, VA, departed this life at her home in the loving care of her family and hospice Wednesday evening, August 12, 2015. Born in Rockingham County, NC on June 23, 1926, she was one of seven children born to the late Charles C. and Ethalinda Jones Griffin.

She was raised in the Bethany Community near Reidsville, NC where she attended the New Lebanon Christian Church and graduated from Bethany High School. She graduated from Elon College and entered the field of public education serving for 36 years as an inspiration to her students especially as she taught them Vocational Home Economics; thirty-four of those years were in the Giles County School System. She was a devoted member of the Pembroke Christian Church (DOC), The Pembroke Woman’s Club and Giles County Retired Teachers Association, and was instrumental in founding the Pembroke Heritage Festival.

Marian married her college sweetheart, the late William Aubrey Law, and they were blessed with over 49 years together until his death. She was also preceded in death by her parents, her brothers and sisters L I Griffin, M R Griffin, Ethalinda Griffin Allred, Virginia Lee Griffin Bailey, and an infant son.

The family sends a special thanks to Good Samaritan Hospice for their wonderful care, especially her nurse, Cindy Heath. She was privileged to have three special sitters, Frances Thornhill, Barbara Vass and Liz Johnston. They became her extended family, and thanks to her special friends Melinda and Melvin Merrix, for their loyal and loving care.

Funeral services will be conducted Sunday evening at 7:00 pm in The Kendall Funeral Home, 605 Snidow St., Pembroke, VA with Pastors Reggie Britts and Eddie Kendall officiating. The family will receive friends at the funeral home from 5 until 7 pm before the services. Burial will follow on Monday, August 17, 2015 at 1:00 pm in the New Lebanon Christian Church Cemetery near Reidsville, NC. In lieu of flowers the family suggests that contributions be made in Marian’s memory to The Pembroke Christian Church or the Giles County Retired Teachers Association. Online condolences may be sent by visiting kendallfuneralhome.com.