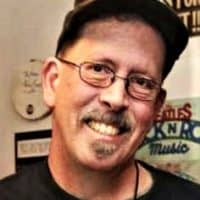 Fredrick Stephen “Fred” Lark passed on Friday, November 19, 2021, at his home in Blacksburg, Virginia. Born Fredrick Stephen Lark, he was the second son of James Willard Lark Jr. and Betty Louise Owens Lark of Pulaski. Mr. Lark, a life-long resident of the New River Valley, was a member of First United Methodist Church in Pulaski.

A 1976 graduate of Pulaski County High School, he continued his education at Virginia Tech before earning his Bachelor of Science Degree at Ferrum College in 1981. He was a recipient of the award for the outstanding student in the business program at Ferrum.

Fred, a natural-born athlete, excelled in basketball and golf, competing on varsity teams at PCHS. In addition, he was a fine tennis player and an accomplished soccer player, competing at college club level.

Mr. Lark’s professional career began in University Golf Operations at Virginia Tech, where he combined his love of golf with his business education. He continued his legal career in Blacksburg. He then enjoyed success as an investor and restaurateur.

Fred’s love of music permeated his entire life. From playing trombone in the PCHS band to guitar in local bands, he was an accomplished musician and songwriter. He loved sharing his musical knowledge and extensive recording collection with family, friends, and students. He frequently hosted programs on WUVT. His artistic skills also included drawing (particularly caricatures) and photography.

Fred’s lifelong passion, however, was The Beatles. Known as “The Beatle Guy,” he was internationally recognized as one of the leading authorities on the “Fab Four,” serving as contributing editor and guest writer for numerous publications. His extensive collection of Beatles music, writings, and memorabilia is one of the most extensive in the world.

Fred loved life, art, music, food, cooking, and Virginia Tech. One of his greatest joys was sharing his culinary skills with others. In particular, he loved sharing food and drink with family and friends at the many VT games and tailgates. He was a beloved son, brother, uncle, and friend.

A private cremation ceremony will be held with friends and family. Per his wishes, Mr. Lark’s ashes will be sprinkled on Abbey Road in London, England. In lieu of flowers, memorials may be made to the Ferrum College Department of Music and Virginia Tech Athletic Foundation – Golf Team.

Arrangements entrusted to Oakey’s Funeral Service – Roanoke Chapel, Roanoke, Va., (540) 982-2100. Online condolences may be shared with the family at www.oakeys.com.