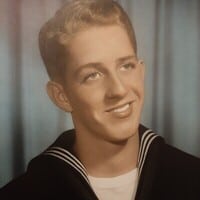 Born on May 12, 1947, James “Jimmy” Langford passed away on February 18, 2022. Jimmy was raised in Giles County Virginia where he met his wife, Barbara Cumbee Langford. They had 53 years, three children, three grandchildren, and two great-grandchildren together. He was the second of four children born to Raymond and Kathleen Langford.

He enlisted in the Navy in 1968 and was stationed in San Francisco. He later entered and retired from the National Guard, serving over 20 years in the 116th Infantry Regiment, 29th Infantry Division out of Bedford VA. He and Barbara lived briefly in Michigan, then moved back to Virginia where they lived in Bedford and Roanoke before returning to their native Giles County.

He leaves behind to cherish his memory his son, Lynn Langford and daughter, Lorri Langford, both of Pembroke; siblings Jackie Venteicher (Roger) of Christiansburg, Gary Langford (Cindy) of Pittsburgh, and Vicki Langford of Christiansburg; grandchildren Josh, Ashley, and Dakota; great-grandchildren, in-laws, cousins, a nephew, and nieces.

Jimmy was predeceased by his wife, Barbara, their daughter, Heather Langford Dehart, his parents, Raymond and Kathleen Langford, and his father- and mother-in-law, Orbie and Pauline Cumbee.

Jimmy’s earthly life has ended but he believed that to be absent from the body is to be present with the Lord.

My Father’s house has many rooms; if that were not so, would I have told you that I am going there to prepare a place for you? John 14:2