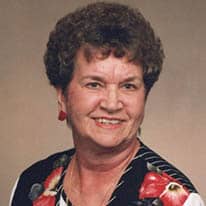 Ellis Mae “Ellismae” Haymore Lambert, 90, gained her angel wings on Friday, December 30, 2022, at her home, surrounded by her loving family.

Ellismae was born May 1, 1932, in Surry County, North Carolina, to her late parents, Ellis Haymore and Mary Elizabeth Nelson and was also loved by her step-father Herbert Clark, who her mother married after the death of her father. Ellismae married Harold Calvin Lambert on December 7, 1948, and they remained together for 60 years until his death on January 3, 2009. Ellismae was also preceded in death by her sisters, Kate Haymore Shrader and Virginia Haymore Hardy; her half-sister Eunice Clark Parks; her brothers Billy Haymore and Coolidge Haymore; and one grandchild, Jeremy Lambert.

Ellismae was an active member of Williams Chapel Church of Christ. She was a homemaker who sewed, gardened, canned and preserved, hunted, killed rattlesnakes, and was the matriarch who handled the family finances, all while maintaining immaculate, red fingernails. She was a stylish woman, often dressing in red and animal print, and wearing fashionable scarves and trendy jewelry. She once told her granddaughter that black pants on a woman attracted everything but men.

Ellismae loved her family dearly, and even in her last week of life, remarked that “babies are meant to be cuddled,” when admiring the picture of a new family member. She was a loving mother, sister, grandmother, mother-in-law, and friend, and will be dearly missed by all who knew her.

Funeral services will be held at Williams Chapel Church of Christ on Tuesday, January 3, 2023, 2:00 pm, with Preacher Danny Hazelwood officiating the service. The family will receive guests before the funeral from 1 – 2 pm at the church. Burial will follow in the Lambert family cemetery in the Wolf Creek community of Bland County. The family will receive friends at the home of Ellismae. The family is being served by Givens-Rife Funeral Service, (540) 726-2442, and online at riffefuneralservice.com.

The family would like to extend sincere thanks and appreciation to the nurses of Medi Home Health & Hospice. Flowers may be delivered to Williams Chapel Church of Christ, 6319 Wolf Creek Highway

Narrows, VA 24124. In lieu of flowers, please consider donating to Medi Home Health & Hospice, St. Jude Children’s Research Hospital, or Williams Chapel Church of Christ. The family is being served by Givens – Riffe Funeral Service in Narrows, 540-726-2442 and written condolences can be shared online at riffefuneralservice.com.