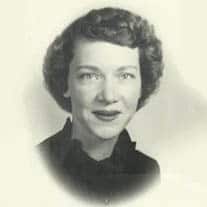 Adele Marchant Lambert of Radford, Virginia, passed away peacefully at Carilion New River Valley Medical Center on January 15, 2022. She was born on June 4, 1929, in Provo, Utah. She is survived by her husband of 70 years, Rogers Franklin Lambert.

She was preceded in death by her son-in-law, Warren Mcbride; a brother, Gary Reed Marchant; and a sister, Jennie Marchant Hyde. She is survived by two brothers, both of Salt Lake City, Utah, Duane and Lewis Marchant; her daughter, Suzanne Mcbride of Radford, Virginia; daughter and husband, Kathryn and Jim Stenquist of Medina, Ohio; two sons and their wives, Brent and Amanda Lambert of Roanoke, Virginia, and Reed and Jessica Lambert of Christiansburg, Virginia. Her family includes 13 grandchildren and 10 great-grandchildren.

She is fondly remembered by friends and family for her devotion and service to others, often manifested by the beautiful quilts and baby blankets that she made and shared. Her children and grandchildren also remember her as a devoted mother and grandmother who attended almost every school event, concert, and game.

There will be a private graveside service and a memorial service planned for a later date.