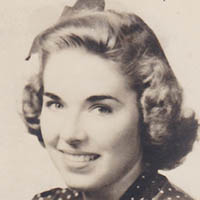 Mary Sullivan Krayer died peacefully on August 2, 2020 at Carrington Place in Rural Retreat, VA at the age of 96.

She is preceded in death by her parents Thomas and Ellen (nee Foley) Sullivan, of New York, husband John “Jack” Krayer of Myrtle Beach, SC, and siblings Tom Sullivan (Cathy) of Easton, MD, Joan Kosnick (Joseph) of Harrisonburg, VA, and Frances who died as a child.

Mary was born on April 24, 1924 in Manhattan NY. She graduated from Flushing High School in 1943 and started nursing studies at Adelphi University in Garden City, NY, during the height of World War II. In 1944 she joined the Cadet Nurse Corps, which provided scholarships for women in nursing school who committed to serve in the nursing profession for the duration of the war. Mary graduated from Adelphi in 1947 as a Registered Nurse, and immediately started working at Flushing Hospital. It was there she met her future husband, Jack—a World War II veteran pursuing a career in furniture sales—whose mother was a patient of hers. They married on October 7, 1950 and began their family in 1951 in Flushing. In 1954, they settled in Stamford, CT where their family grew to include six children. In 1968 the family moved to Radford, VA following Jack’s acquisition of a furniture manufacturing company in the area. Over decades in Radford, Mary made many dear friends, finished raising her children, welcomed her first grandchild, sang in the choir at St. Jude’s Catholic Church with her dear friend Susie Goodykoontz, and started her career as a hospice nurse.

When she and Jack divorced in 1983, Mary moved to Myrtle Beach, SC. There, she built a new life by the ocean, worked as a hospice nurse, and joined the Unity Church of the Grand Strand, playing the organ most Sundays. In 1990, she and Jack reunited and remarried in a joyful ceremony witnessed by all their children, children’s spouses, and grandchildren at the time.

Mary joined Jack and their son Kevin in St. Mary’s County, MD where she volunteered at a local hospice until she and Jack moved back to Myrtle Beach, where they lived until he died in 1995. A few years later Mary returned to Radford to be closer to her family. In those years she attended Unity of Roanoke Valley and Unity Christian Church in Radford, worked as a docent at a local historic site, and faithfully attended a meditation group. She was an avid tennis player and enjoyed playing doubles into her 80s. Her lifelong love of bridge continued through her years at Showalter Center at Warm Hearth Village in Blacksburg, VA.

Due to the Covid-19 crisis, a memorial service will be scheduled for a later date in Radford VA. Interment will take place at Arlington National Cemetery in the future. If you wish to make donation in Mary’s honor, please consider a hospice of your choice.