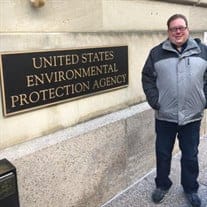 On Friday, October 29, 2021 the world found out it had lost a hero. John Travis Krallman, of Blacksburg, was found deceased in his condo in Silver Springs Maryland. John, to the world, and Travis, to his family, was born on a snowy Saturday, January 9, 1982 in Pittsburgh, PA. He was predeceased by his grandparents, Alvah and Thelma Hylton of Blacksburg and John W. and Edith Krallman of Irwin, PA.

Travis was a gifted and focused student. He graduated from Blacksburg High School in 2000, where he loved forensics. He was a National Merit scholar and chose to attend Virginia Tech, double majoring in Chemical Engineering and Chemistry. Travis found out his first semester in the co-op program that he really didn’t want to be a chemical engineer so refocused on his passion, the environment. He was active in student climate action organizations at Virginia Tech. After graduation, he worked as an environmental engineer for three years with UBS, learning about clean air and the Clean Air Act. Even before graduating from Virginia Tech, John Travis planned on going on to law school to become an environmental lawyer. After UBS, he attended Lewis and Clark School of Law in Portland OR where he was champion his second year and runner-up his third year in the National Environmental Law Moot Court Competition. He interned for one year at EPA, Boston office. When that ended he returned to Portland as Counsel for Neighbors for Clean Air helping to lead the fight for clean air in Oregon. He loved his job and the people he worked with and would have stayed but his dream job called. He was hired as an attorney in the Air and Radiation Law Office, Office of General Counsel, EPA in Washington, where he worked until his death.

John was not only a gifted attorney, combining his technical background with an encyclopedic knowledge of the Clean Air act, but a great mentor, team player and friend to all that knew him. He was a beloved “uncle” to his second cousins, friend and mentor to his brother and a model son. He will be sorely missed.

Family visitation will be Wednesday, November 3, 2021 at McCoy Funeral Home from 5:00 to 7:00 P.M. A Memorial Service will be held at St. Michael Lutheran Church in Blacksburg at 1:00 P.M. on Thursday, November 4, at 1:00 P.M. For those that cannot attend in person, live-stream will be available from the church’s website.

In lieu of flowers, the family asks that memorial gifts be made to Neighbors for Clean Air in John Travis’s name or you can plant a tree in his honor. As one friend put it to us, Mother Earth has lost a great advocate.