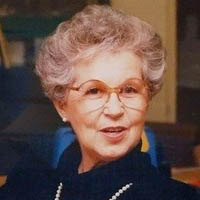 Mary Jo Knouff died at the age of 95 on Thursday, April 15, 2021 at her home in Blacksburg, Virginia, comforted by her husband and grandchildren.

Mrs. Knouff was born in Mullins, West Virginia in 1925 to Luther and Bircie Thompson. She graduated from Concord College in 1948 and later worked as a teacher in Montana; it was there that she learned to fly and turned a love of flying into a career that took her to a distinguished position in the Federal Aviation Administration in Washington D.C. She developed and implemented a plan for Aviation Education in secondary schools that eventually led to her receiving the Frank G. Brewer Award for Excellence in Aviation Education. In her capacity with the FAA, Mary Jo spearheaded many workshops and seminars on her specialty, culminating in leading a delegation to Moscow, Russia to promote Aviation Education. This was her 50th year as a member of the Ninety-Nines, an organization of women pilots.