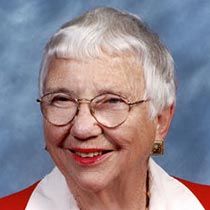 Beulah’s father died when she was thirteen, and Beulah and her mother moved to Cherry Tree, Pennsylvania. Beulah attended college in Lacrosse, Wisconsin, and graduated from Slippery Rock University in Pennsylvania. She began her teaching career in a two-room schoolhouse in Sewickley, Pennsylvania, during World War II. Her mother ran a greenhouse, and soon, Beulah’s mother, and then Beulah herself, got to know the Vocational Agriculture teacher at Cherry Tree High School, Ralph G. Kline. Beulah and Ralph were married November 14, 1946. After their marriage, births of Phyllis and John, and moves for the completion of Ralph’s education to Penn State and NC State, the family finally settled in Blacksburg, Virginia, where Ralph taught Ag Economics at Virginia Tech.

Beulah taught first grade at the former Blacksburg Elementary School beginning in 1956, and moved on to Margaret Beeks Elementary School where she taught first grade until her retirement in 1979. She returned to Beeks that fall as a volunteer and began teaching English as a Second Language to kindergarten and first grade children from around the world. She continued to volunteer as an ESL teacher for the next 28 years, until the summer she turned 90. The Blacksburg Lions Club and the Christiansburg/Blacksburg Rotary Club honored her as Citizen of the Year.

Ralph and Beulah were host family to dozens of Virginia Tech international students as well. Their “First Friday” suppers filled the house for many years, and the connections made with those students continued throughout her life. Beulah and Ralph traveled together to Germany to visit a student as well as son, John, in Spain. After Ralph’s death in 1985, Beulah visited former students in India, Jerusalem, Turkey, and Japan. Local travels always included a week each summer on the Outer Banks. Although she never managed to visit Kenya, she had many members of the Virginia Tech Kenyan community who considered her part of their families. Christmas phone calls might come from Palestine, Sri Lanka, or from students from the Philippines or Taiwan.

Ralph and Beulah were active members of Blacksburg Presbyterian Church, where Beulah served as a deacon, participated in the Forum Sunday School Class and Presbyterian Women, and was a member of the Peacemaking Committee. She enjoyed her membership in ADK, Ag Econ Women, and several faculty women’s cooking groups. Beulah loved animals of all kinds, and the cats and dogs who moved through her life gave her great pleasure. She firmly believed in the power of positive thinking.

Daughter Phyllis and her husband, David Appler, of Hudson, N.H., and son John and his wife, Margery, of Blacksburg, survive Beulah. John and Marge lived with Beulah so she could remain at home. Her grandchildren include Vivian Ruth Appler and her husband, David Bow, of Charleston, S.C., Douglas Ross Appler and his wife, Krista Jacobsen, of Lexington, Ky., and Vincent Edward Kline of Blacksburg. She also enjoyed her young great-grandson, Samuel Ross Appler of Lexington, Ky.

Special friends, Janie Smith and Zetta Davis, can never be thanked enough. Beulah and Ralph had many Kline nieces and nephews who often spent time in Blacksburg. As an only child, Beulah was very close to her Tonkin and Longacre cousins.

Donations in her name may be made to the Ralph and Beulah Kline Graduate Fellowship in Agricultural Economics at Virginia Tech.

A celebration of Beulah’s life well lived will be held 2 p.m. Sunday, July 17, 2016, at Blacksburg Presbyterian Church with a time of sharing to follow at the church. Arrangements by McCoy Funeral Home, Blacksburg.