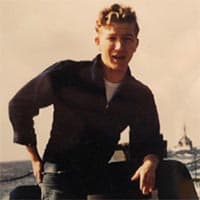 He joined the Navy during the Korean war and served on board the USS Mansfield DD 728. After the Navy he was hired as a postal clerk in Washington, D.C., and worked in the USPS Mail Car for ten and a half years. He worked in SCF Pulaski for nine years and transferred to Monterey, Va. as Postmaster there for two and a half years, and transferred to Ferrum, Va. as Postmaster, then retiring in November 1987. After retirement he played golf and enjoyed playing with seniors at Great Oaks. He loved to work outside with plants and trees.

Joe gave his heart to Jesus Christ in 1970 and served Him until his death. He is gone to see family and friends.

The family wishes to thank the Doctors, Nurses and Staff at LGMC, Salem.

Funeral services will be conducted Tuesday, June 4, 2019 at 11:00 am in the Southwest Virginia Veterans Cemetery, Dublin with Jody Kitts and Rev. Eddie Roberts officiating.