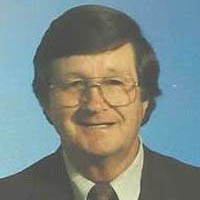 Jack retired from Nationwide Insurance, Co. with 38 years’ service. He organized the cancer unit of the American Cancer society in Floyd, Va. He was a founding member of the Great Oaks Country Club, and was a board member for 25 years. He was founding member of the New River Planning District Community, and served on the board of Directors for 15 years. He was also founding member of the New River Development corp. and served on the board for Floyd for 13 years. Jack was a graduate of Christiansburg High School class of 1951, and played football and baseball. He also sang in the National FFA chorus in 1951. He was a 60 year member of the Montgomery C o Game and Fish club. He was an active member of Floyd Baptist Church for 50 plus years. Jack served on the board of Directors of the West Central 4H Camp at Smith Mountain Lake for 3 years during the construction of the pool, cafeteria, and barracks. He served in the U.S Army from 1953 to 1955 in Verdun France.

In lieu of flowers dontations can be made to the Floyd County Humane Society.