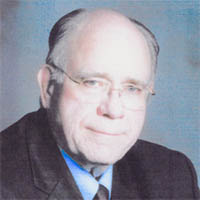 Gordon was known as a man of integrity. He was devoted to and love his family and the Lord Jesus. He was a great husband, father and grandfather. He was a quiet man who found joy and contentment in his faith, family and work. He was very proud of all of his students he mentored over his years of teaching.

Gordon received his degrees from the University of Virginia. He was a professor of Mechanical Engineering at Virginia Tech from 1985 to 2013. Prior to this he worked in industry at Pratt & Whitney Aircraft and Ingersoll-Rand. After retirement, he continued working as a consultant and writing technical papers for various conferences.

In addition to this parents, Gordon was preceded in death by his son, Timothy, and his sister, Phyllis Stevens. He is survived by his wife, Janie; daughter, Andrea Kirk; granddaughter, Faith Wilkins; brother, Hubert Kirk (Barbara) of Ohio; and many other loved ones.

The family would like to thank everyone at Blue Ridge Cancer Care and Carilion Hospice. Thank you Dr. McCoy, Nicole, Amanda and Heather.

A celebration of life will be held on Sunday, September 9, 2018 at 3:30 p.m. at Blacksburg Christian Fellowship with a reception immediately following the service. Burial will be private.