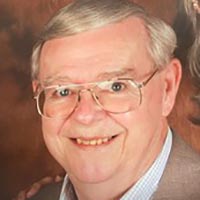 Raymond Reynarld Kirby, 78, of Floyd passed from this life into the arms of Jesus on Monday, January 27, 2020. He was preceded in death by his parents, Ernest Wilson Kirby and Juanita Cregger Kirby.

He is survived by his wife of 57 years, Adelene Craghead Kirby of Floyd; one son, Michael Steven Kirby of Floyd; two grandchildren, Elijah Steven Kirby, and Caroline Lilly Kirby of Blacksburg; his step-mother, Dorothy Farmer Kirby of Radford; one brother, Rodney Neal Kirby and wife Martha of Georgia; one sister-in-law, Frances Blevins of Vinton; one niece and five nephews, cousins, and other relatives; and two beloved dogs, Niki and Millie.

Ray was born in Marion, VA, in 1941. He moved to Christiansburg in 1953, where he began his career with a newspaper route. He moved to Roanoke and attended William Fleming High School, Class of 1959. He worked for Kroger throughout high school and during college breaks. He attended Virginia Tech, participated in the corps of Cadets, and graduated in 1963. He worked for General Electric in Louisville, Kentucky; First National Exchange Bank in Roanoke; and Malone and Hyde Wholesale Grocery in Salem. In 1973, he became owner and manager of Ray’s Sureway Supermarket in Floyd.

After leaving the grocery business, he began working for Radford University as a part-time computer programmer and advanced to become Director of Information Technology and Chief Information Officer for the university, the position from which he retired from in 2006. In retirement Ray loved to listen to music and do woodworking. He built furniture, jewelry boxes, a dog house, and other beautiful and useful items.

He was a gardener, a singer, a trumpet player, a business man, a grocer, a educator, and a leader. In his quiet, humble way, he showed kindness and respect to everyone he met. He loved God, his country, and his family. He was a dog lover who welcomed sixteen dogs into his life over the years.

The family requests that those who wish to send memorial gifts please consider Veterans of Foreign Wars of the United States P.O. Box 8911, Topeka, KS 66608-9940, or any other veterans support groups.

Graveside services will be private.