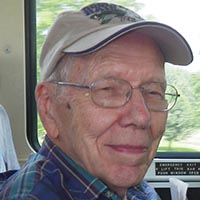 Bertram Y. Kinzey Jr., passed away on Monday, September 9, 2019, and through the grace of his Savior, Jesus Christ, was reunited with his beloved wife, Virginia, in their heavenly home.

Bert was born in Holden, Mass., to Bertram Y. Kinzey, Sr., and Gertrude Sampson Kinzey on September 25, 1921, as the oldest of their four children. He grew up in Ohio and Virginia, before attending Virginia Tech where he received his bachelors degree in 1942 and his masters degree in 1943 in architectural engineering.

During his time as a student, he served as organist at the Luther Memorial Lutheran Church in Blacksburg, using his passion for pipe organs to serve the Lord. Following his graduation, he worked as a naval architect at the Norfolk Navy Yard during World War II.

On November 24, 1944, he married Ellen Virginia Smith of Danville, Va. Immediately following the war, he worked briefly at an architectural firm in Richmond, and his first son, Bertram Y. Kinzey III, was born in 1945. The family then moved to Blacksburg where he joined the faculty at Virginia Tech. Again, he became the organist at the Lutheran church. A second son, Douglas W. Kinzey, was born in 1948. In 1956, he acquired the pipe organ from the Methodist church in Blacksburg, and his home would always have the ever-expanding pipe organ for the next fifty years.

In 1959, Bert moved to Gainesville, Florida, to take a position on the faculty of the University of Florida. He became known as a pioneer in the environmental technologies of architecture, and he wrote a widely-used textbook on the subject. He continued his interest in pipe organs, playing for services and also singing in the church choir. Bert and Virginia were members of First Methodist and Holy Trinity Episcopal churches during their years in Gainesville. He designed and built his own home, doing most of the construction himself. Bert continued to serve on the faculty at the University of Florida until his retirement, and even continued to teach after his retirement as a professor emeritus. He was also an active consultant in his field, contributing to many projects worldwide.

In 2006, he returned once again to Blacksburg, Va., where he lived for the rest of his life. He remained very active well into his 90s, and in 2017, he traveled to Boston where he received the highest award in his field, the Charles Paul Boner Medal, for his contributions to the environmental technologies in architecture. Former students and colleagues from around the world participated in the two-day recognition event.

He was preceded in death by his parents, a brother, John S. Kinzey; his sister, Gertrude (Trudy) K. Reed, and his wife, Virginia. He is survived by his brother, Allen B. Kinzey of Tucson, Ariz.; his son, Bertram Y. Kinzey III, and his wife Lynda, of Blacksburg; and son, Douglas W. Kinzey of Dallas, Texas. He has two grandchildren, Janet Kinzey of Athens, Ga., and Bertram Y. (Chip) Kinzey, and his wife, Valerie, of Catawba, Va., and four great-grandsons, Zachary Clark Jarrett, Richard Michael Gomez, Liam Owen Kinzey, and Charles Douglas Kinzey.

In lieu of flowers, the family requests donations be made in his honor to music program at Christ Episcopal Church, 120 Church Street NE, Blacksburg, Va., 24060 where he was a member of the choir until his passing.