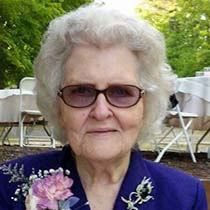 Virgie Wade Stowers Cox Kingrea, 88, of Dublin went peacefully home to be with the Lord following a long illness with Alzheimer’s on Christmas night at New River Valley Medical Center.

She was born June 12, 1928 to the late Owen and Cumi Reed Wade. She was preceded in death by her husband of 42 years and father of her children, Oliver Stowers; her husband, Homer Cox; son, John Stowers; daughter Emma Stowers, granddaughter Carrie Stowers, and two great-grandchildren; five brothers; two sisters; two sons-in-law and one sister-in-law.

She was a faithful member of Dublin Church of God for more than 50 years. She was a devoted and loving wife, mother, grandmother, and mother-in-law. Virgie held numerous jobs throughout the years including many years at Flo Research Laboratories and retired from Pulaski Laundry. Following retirement, she generously gave of her time singing with her husband Bob Kingrea at local nursing homes. Her hobbies included ceramics which she enjoyed making and giving to family and friends. Prior to her illness, she loved to shop!