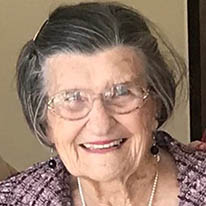 Lola Margaret “Margy” McCreary Kingrea, age 94, passed away peacefully, surrounded by her children, on Wednesday, September 22, 2021, at the Williamsburg Senior Living Community in Baton Rouge, Louisiana. She was born on January 23, 1927, in Dallas, Texas to Lora and Owen McCreary.

Margaret grew up an only child in the Oak Cliff neighborhood of Dallas, loved dearly by her parents and her many kissing cousins. Following high school graduation, Margaret worked part time while attending North Texas State College. After a whirlwind courtship Margaret married the love of her life, Charles “Leo” Kingrea on March 15, 1946. Leo was also an only child, and together he and Margaret created an enduring legacy of love through their children, grandchildren, and great-grandchildren. Their two sons, Rick and David, were born in Narrows, Virginia.

After Leo finished his studies, the family moved to Baton Rouge, Louisiana, where their third and final child, Kay, was born. Margaret and Leo raised their children in the Goodwood section of Baton Rouge, where they made many life-long friends. Almost daily, residents of Goodwood would hear Margaret’s voice boom from the porch as she reigned in her three children. For both Margy and Leo these were good years devoted to the children they loved.

Margaret and Leo maintained a residence in Narrows, and after Leo’s retirement, they spent their summers in Virginia, where they enjoyed spending time with their best friends and traveling companions, Geneva and Paul Mullins. Margaret became “Margy” with the birth of her oldest grandson and has been affectionately called that by most family member since. One of the things that made Margaret happiest was having her family together She especially enjoyed getting everyone together for a week-long vacation in Gulf Shores, Alabama, at the Pelican beach house. These were times when stories would be shared and laughter would flow; “Margy” not only contributed stories but participated in every moment of the many fun times.

While Margy’s family was of the utmost importance to her, she was also a strong woman of independent thought and determination, a leader of her generation of thoughtful women who had no trouble expressing her opinion. After Leo’s death, she was determined to live as independently as she could and she who had never lived alone, did so for the next twenty years.

She had a great sense of humor, a vibrant personality and enjoyed many friends. She maintained a personal interest in reading, sewing, bridge, travel, and later in life, writing. She gifted a book she had written about her life to her entire family from children to greatgrandchildren. She was a proud member of Ingleside Methodist Church for close to seventy years.

Margaret was preceded in death by her parents; her husband, Leo; and her daughter-in-law, Deborah Davidson Kingrea. She is survived by her three children, Richard Owen Kingrea of Fairhope, Alabama; David Leonard Kingrea, and his wife, Bonna, of Covington, Louisiana; and Kay Kingrea Barnhill of Little Rock, Arkansas. Other survivors include her ten grandchildren: Rocky, Eric, and Taylor Kingrea; Tommy Calicchio, and Craig and Leigh Helen Kingrea; and Maggie, Colleen, Jamie, and Caroline Barnhill. Margaret also has ten great-grandchildren, as well as surviving relatives in Texas and special friends in Arkansas and other places across the country.

A celebration of Margaret’s life will be held at Ingleside Methodist Church, 4264 Capital Heights Avenue, on Monday, September 27, 2021 at 11am, with visitation taking place in the hour preceding the service. A burial service will be held Monday, October 4, 2021 at 11am at Birchlawn Burial Park in Pearisburg, Virginia.

In lieu of flowers, Margaret’s family has suggested that donations be given to Ingleside Methodist Church.

Margaret’s family also would like to give a special thanks to Cheri Strickland and the staff at Williamsburg for the care they gave Margaret the final years of her life.