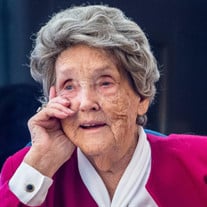 Thelma settled in Nashville TN, teaching in the city’s public schools, and was active in Junior Women’s Club. While in Nashville, she met Howard King Jr. on a blind date, subsequently marrying him on April 7, 1950. She, along with her husband and son, Howard III, moved to Blacksburg VA in 1955 when Howard Jr. became the Director of Food Services at Virginia Tech.

In Blacksburg, Thelma taught Sunday school at the Blacksburg United Methodist Church, and returned to teaching in public schools at Margaret Beeks Elementary School when it opened in 1963, retiring in 1987. She was a representative to the National Education Association, and a member of Alpha Delta Kappa.

Thelma also devoted her time to the Blacksburg United Methodist Church, was a member of the Montgomery County Action board, and volunteered for the Interfaith Food Pantry. She was an avid bridge player.

A graveside service, delayed a year by the pandemic, will be conducted at Westview Cemetery on Roanoke Street in Blacksburg at 10:30am on Saturday June 19, 2021, followed by a reception at the Blacksburg United Methodist Church.

In lieu of flowers, the family suggests donations to either the Blacksburg United Methodist Church, or the Warm Hearth Foundation. Funeral arrangements are being handled by McCoy Funeral Home in Blacksburg.