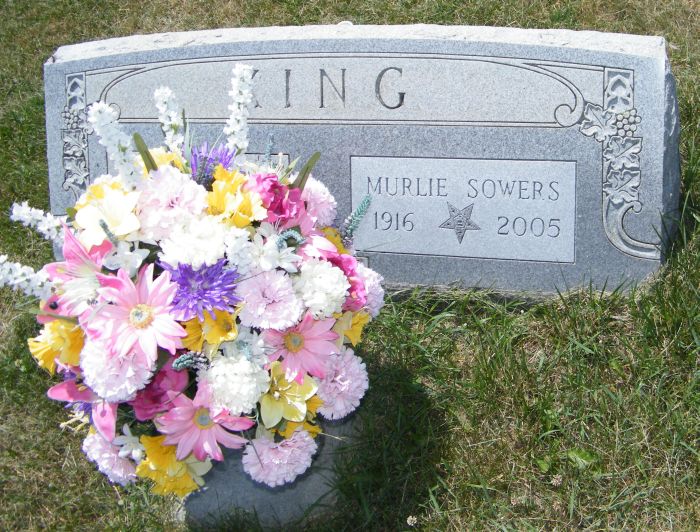 Murlie Elizabeth Sowers King, 89 of Richmond, formerly of Pulaski County, died Friday afternoon, December 16, 2005 in a Richmond Hospital surrounded by her loved ones. Born February 6, 1916 in Pulaski County, she was the daughter of the late Martha Ellen Bowers Sowers and George Thomas Sowers.

In addition to her parents, she was preceded in death by her husband W. H. “Bud” King, four brothers and four sisters and a wonderful grandchild, Lisa King. She is survived by three sons, Buddy W. King and his wife Shelvia, of Virginia Beach, Charles R. King and Wilbur L. King, both of Richmond; a brother, Walter “Red” Sowers of Dublin; six grandchildren and nine great-grandchildren. She is also survived by a special niece, Deborah Hollandsworth and her husband Lee.

Funeral services will be held Monday, December 19, 2005 at 11 a.m. at Thomas M. Seagle & Sons with the Rev. Randy Winn officiating. Interment will follow in the Dublin Town Cemetery. Visiting will be anytime Sunday after 1 p.m. at the funeral home, where the family will receive friends from 3 until 5 p.m.

The family wishes to express deep appreciation to Mr. and Mrs. Jay Snoddy of Richmond for their love and kindness to our mother.

Flowers will be appreciated, but for those who wish, they may make memorial contributions to any local organization. Online condolences may be sent to the family by visiting www.seaglefuneralhome.com Arrangements by Thomas M. Seagle & Sons, Pulaski.