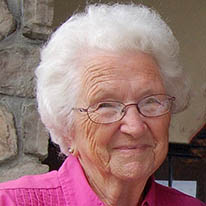 Mabel Morris King, 91 of Pearisburg, VA. (the Thessalia Community), went home to be with Jesus on Monday, August 16, 2021. Mrs. King was born in Pulaski County and was a daughter of the late Elgene and Annie Mae Morris. She was proceeded in death by her husband of 68 years Hugh King; sisters, Mae Anderson, Grace Crane, June King, Jean McPeak, Janet Shumate, Patsy Carr and brother E. B. Morris, Jr.

Mrs. King was retired from the Celanese Corporation in Narrows, VA.

Funeral services will be held Thursday, August 19th at 2:00 pm at the Givens Funeral Chapel in Pearisburg with her son-in-law Pastor Tracy Allen and Charles Henderson officiating with entombment at the Birchlawn Abby in Pearisburg, VA. The family will receive friends at Givens Funeral Home one hour before the service from 1-2 pm.

In lieu of flowers please consider giving a donation to the charity of your choice. Online condolences can be sent to the family at givenfuneralhome.com