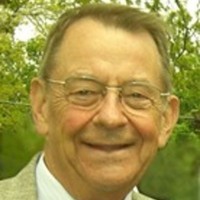 He was the oldest of seven children born to Mildred and Gordon King. He grew up in New Bern, Virginia, graduate of Pulaski High School, National Business College and Virginia Tech. Gordon served proudly in the U.S. Army.

Gordon’s career included Armstrong Cork Co., Price Waterhouse & Co. and the Inter-American Development Bank. He finished his career as an Executive with the Washington Post Company.

After retirement, Gordon and his wife, Barbara, moved to Bath County, Virginia and became active members of the community. He was a member of the Bolar Ruritan Club, appointed member of the Bath County Industrial Development Authority and served on the Board of Directors for the Shenandoah Valley Partnerships. Gordon belonged to the Millboro Masonic Lodge #28 and the Shrine Club of the Roanoke Valley.

Faith and Fincastle United Methodist Church were huge parts of Gordon’s life. One of his greatest personal accomplishments was helping to bring financial stability to his FUMC family.

Gordon was a champion at helping others and providing expert financial advice. He enjoyed assisting others whose needs meshed with his talents and knowledge.

Gordon, aka G.C, Pop, is survived by the love of his life for 66 years, Barbara (Chink) Graham King; son, Michael and his wife Susan, daughter, Ute Tucker and her husband Ed, son, Norman and his wife, Carole and a daughter Terry Garris and her husband, James.

The family will receive friends Monday evening, September 30, 2019 from 6:30-7:30 PM at Mullins Funeral Home. Graveside Ceremony will be Tuesday, October 1, 2019 at 1:00 PM at Westview Cemetery in Radford Virginia.

Arrangements are in the care of Mullins Funeral Home, 120 W. Main Street, Radford, Virginia and Kenneth Poe Services in Charlotte.