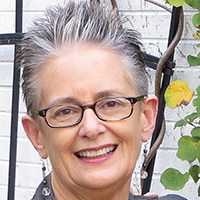 Ann White King, age 69, of Richmond, Va., after a courageous journey with ALS, died at home, surrounded by family, with an inner smile and deep peace Jan. 30, 2020.

Ann and Bob grew up in Southwest Virginia to kind, loving and service-oriented parents. Ann was very proud of her hillbilly roots and did not mind Don calling her a hillbilly princess. She loved country and mountain music. Her favorite spot on earth was the family cabin at Claytor Lake, built by her grandfather in the late 1940s. She continued to go back there her entire life.

Ann knew from an early age she wanted to be a nurse. She and her childhood friend, Alyson Howard, entered the Medical College of Virginia Nursing School in 1968. She returned to Virginia Commonwealth University for her masters in nursing in 1975. Ann was a pioneer in the emerging specialty of wound, ostomy and continence nursing (WOCN) until her retirement in 2015.

Ann met Don, the love of her life to whom she was married for over 40 years, on a blind date arranged by her graduate nursing professor, Ann Hamric. Little did she know the adventures they would share, starting with a honeymoon to Egypt. They restored a home in Church Hill, where Ann had four extraordinary children. Being their mother was one of the greatest privileges and joys of her life. The accidental death of Edward, their youngest, at age 2-½, was a profound tragedy. The Edward White King Memorial Fund at HomeAgain, founded with the help of Erika Raskin Littlewood to benefit Richmond area homeless children, has helped the family live out Edward’s death.

Several years after Edward’s death, the family moved to Brussels, Belgium, where Don became head of McGuireWoods law office. It was a great blessing that helped restore the family’s joy. Ann volunteered at the crisis hotline for English speakers, immersed herself in school activities and hosted a steady stream of visitors. She enjoyed travel throughout Europe, as well as to India, Africa and Asia, often including vacation trips with friends Carol and Bob Hiett.

Upon returning to Richmond after six years in Brussels, Ann resumed her nursing career, helping patients with ostomies and other difficult wounds to achieve a better quality of life. This included palliative wound care, bereavement and end of life issues. Ann co-chaired the VCU Bereavement Committee. Following retirement, Ann and Roxanne Cherry hosted a series of dinners entitled “Let’s Have Dinner and Talk About Death,” part of a national movement to help people achieve their end of life desires.

Annual mission trips to Honduras and Haiti were another important part of Ann’s nursing career. She loved providing nursing care to the people she served, especially the young children. She was quite proud of convincing Don to go with her to help. Not long before she died, Ann wept as she viewed films of her loving work on these trips.

For most of her adult life, Ann attended the Cathedral of the Sacred Heart, where she led a Bible Study for the last 15 years and where she and Don renewed their wedding vows on their 40th anniversary. Monsignor Patrick Golden challenged Ann to die in such a way as to make her dying a gift to others.

After her retirement from nursing and diagnosis of ALS, Ann got two tattoos: a smile on her toe and deep peace on her wrist. They were her reminder to live with an inner smile and deep peace in spite of circumstances.

One of Ann’s greatest joys was her many women friends. She loved nothing more than sitting around her kitchen table with pretty dishes and good food while sharing intimate conversation. Surprisingly, Ann’s final years living with ALS proved to be some of the most deeply lived of her life. Kathy Frasca, Martha Gibbons, Sue Greishaw and many others were so devoted to Ann during this time.

Special thanks go to VCU ALS Clinic, Bon Secours Hospice and registered nurse Barbara Radford, Nicole Chase with Comfort Keepers, the friends and neighbors who filled the Meal Train for so many months and the many others who gave Ann such beautiful love and support.