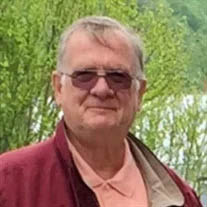 Ronald “Ron” Francis Kietrys, 79, of Christiansburg, VA and formerly of Great Meadows, NJ passed away on Saturday, September 5, 2020 after a long illness. Ronald was born on July 12, 1941 in Jersey City, NJ. He was the second of 3 sons born to John Francis Kietrys and Mary Helen Kozlowski.

He was a 1959 graduate of Hackettstown High School. He was a veteran and served his country in the United States Army and the National Guard at Fort Dix, NJ. Ron married the love of his life Mary in Newton, NJ on September 23, 1978. Ron and Mary moved from NJ to Christiansburg in 2004 to be close to his nephew Michael and his wife Amy and their young children John and Casey.

Prior to moving to Virginia, Ronald was employed for a number of years by M&M Mars in Hackettstown, NJ. He was an entrepreneur for 30 years as the owner of Ron’s Tavern in Great Meadows, NJ. After retiring and moving to Virginia in 2004, Ronald enjoyed working part-time in the Home and Garden section of the Home Depot in Christiansburg. Ronald was an avid college football fan and was a Virginia Tech season ticket holder for the last 16 years.

Ronald is survived by his beloved wife of 41 years, Mary, his older brother John and his wife Shirley of Christiansburg, VA, his nephew Michael and his wife Amy and their children John and Casey, of Christiansburg, VA, his niece Kelly and her husband Doug Wallace and their son Bradley of Phoenix, AZ and Ronald’s younger brother Raymond and his wife Patti of Hackettstown, NJ and his niece Krista and her husband Eric Roberts and their son Patrick of Princeton, NJ. Ronald is survived by additional extended family in New Jersey and many cherished friends.