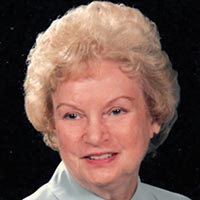 Carolyn Brooks Thomas Keyser, 97, of Pulaski, VA and formerly of Blacksburg, VA, on September 6, 2019, peacefully passed at the Pulaski Health and Rehabilitation Center, Pulaski, VA. She was pre-deceased by her loving husbands, Howard Adams Thomas, who died in 1982, and William Keyser, who died in 1989.

Born November 9, 1921, Carolyn was a long-time resident of the Northern Virginia area, having grown up in Falls Church, received a teaching degree from the University of North Carolina in Greensboro. During WWII, Carolyn taught at Swanson Middle School in Westover, Virginia. Later Carolyn was one of the first ESL teachers in Fairfax County. Her passion for genealogical research took her on many travels. Carolyn was a long-time member of the Daughters of the American Revolution (DAR), the National Society of Magna Carta Dames, the National Society of Colonial Dames XVII Century, and the Woman’s Club of Falls Church. She was also a member of the Falls Church Presbyterian Church in Falls Church, Virginia, where she served as a deacon. She was a volunteer for Meals on Wheels. Carolyn began playing bridge as a teenager and continued to play throughout her lifetime, enjoying the company of many wonderful friends.

A Celebration of Life Service will be held at a later date. In lieu of flowers, donations may be made to First United Methodist Church Children’s Ministry in Pulaski, Virginia.