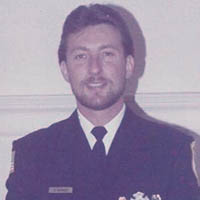 Stephen (Steve) Ray Kessler, 66 of Narrows, Va. went to be with the Lord on Monday, October 27, 2020 at his home. Steve was born on September 9, 1954 in Charleston, WV. and was the son of the late Kenneth Ray Kessler and Anna Cosby Garten Kessler. Besides his parents, he was preceded in death by Everett Lee who he called “Pop.”

Steve worked in the Chemical industry for many years. He also was a fireman in New Jersey. He then moved to Narrows to be with his mom. He was a former employee of Scott Scientific Gases in New Jersey, the Wal-Mart store in Pearisburg and the Celanese Corp. in Narrows. Steve was a lifetime member of the New Jersey State Fireman’s Association with the Woodbridge Fire Department and an avid Harley-Davidson motorcycle rider.

He is survived by his companion of 15 years, Linda Maxey Snider of Narrows, her two children, Joshua R. Snider and fiancé Michaela of Pearisburg, Krystal S. Covey and husband Wayne of Pulaski, seven grandchildren, Gabe, Eli, Brooklyn, Willow, Magnolia, Memphis and Gunner, who he thought all of them as his own. And many, many friends.