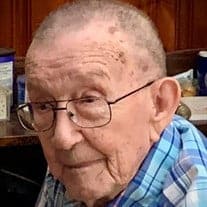 Ira Omer Kessinger, age 90, of Radford died, October 5, 2021. He was born in McCoy, Va. on July 6, 1931 to the late Marvin Kemper and Woneda Ruth Meredith Kessinger. He was also preceded in death by his wife, Hazel Ramsey Kessinger and son, Jeffry Kessinger.

He was retired from the United States Air Force after 24 years of service, where he served in Korea. Ira was a member of the Fairlawn United Methodist Church and a member of the Virginia May Lodge #38 in Radford.

Funeral services will be conducted Thursday, October 21, 2021 at 11:00 am in the McCoy Funeral Home Chapel with the Pastor Mark Miller officiating. Interment will follow in the Westview Cemetery.

In lieu of flowers memorial contributions may be made to St. Judes or Fairlawn United Methodist Church.

The family will receive friends 10-11:00 am Thursday prior to the service at McCoy Funeral Home 150 Country Club Dr. SW, Blacksburg.