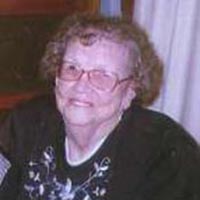 Beulah May (Boots) Kerr, 87, of Pearisburg, departed this life Monday evening, March 24, 2014 at Carilion Giles Community Hospital in Pearisburg. Born in Pulaski on January 27, 1927, she was a daughter of the late Roby and Lula Dalton Jones.

Boots was member of the First United Methodist Church in Pearisburg, was retired from the Celanese Plant at Narrows with 46 years service, had been a “Red Hat Lady”, had been active in the Giles County React Club and had served as Worthy Matron of The Eastern Star Pearisburg Chapter No 124.

She was preceded in death by her parents, her husband Stanley Glenn Kerr, Sr., her brothers Boyd, Coy, Lonnie, and Kenneth Jones, and her sisters Julia Morris, Nellie Dalton, Carrie Jennelle, and Phyllis Wiliams.

She leaves to cherish her memory her son and daughter-in-law with whom she made her home Stanley G. Jr. and Stonna Kerr of Pearisburg; her granddaughter and her husband Danielle and Mike Bell of Pearisburg; her brother Ralph Jones of Pulaski; her sister Frances Parks of Pulaski and a host of nieces, nephews, and friends.

Funeral services will be conducted Thursday at 11:00 am in the Kendall Funeral Home, 605 Snidow St., Pembroke with The Rev. Dr. Fred Austin and Pastor Don Elswick officiating. Burial will follow in Birchlawn Burial Park in Pearisburg. The family will receive friends at the funeral home Wednesday evening from 6 until 8 pm.