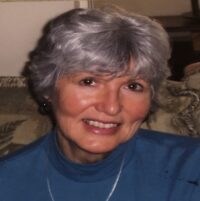 Priscilla “Jean” Dunford Keating, 80, returned to her heavenly home on Monday, November 30th at 7:45 am in Asheville, North Carolina.  Jean was born to the late Fred Baker Dunford & Ruby Graham Dunford of Draper, VA on October 26th, 1940 in Austinville, VA.

From an early age, Jean was immersed in the Christian Community which was her lifelong support.  Her devotion to her family and firm belief in God ultimately gave her peace.  Jean’s Christian faith was central to her life and she often encouraged others with God’s love.

She was a graduate of old Dublin High School in Dublin, VA and Bluefield College in Bluefield, VA and a retiree of The Department of Internal Affairs in Washington, DC.

Jean was blessed with a large and loving family.

Jean’s wishes were to be laid to rest next to her son Sean Keating at the Washington National Cemetery where a private interment was held on Monday, December 7th.

A celebration of life ceremony will be held for family and friends in the coming months.