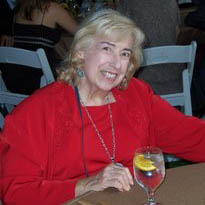 Laurel Childe Kassoff, age 95, passed away peacefully in her sleep at her home in Blacksburg, Virginia, on Friday, September 18, 2020.

Born Laurel Marian Childe, raised in Nebraska and Wisconsin, she went on to earn degrees at the University of Chicago and Columbia University. After becoming a clinical psychologist, she worked for 42 years in several clinics and later in private practice in northern Virginia. After retiring, she volunteered as a counselor at county juvenile detention centers in Leesburg and Christiansburg, Virginia. Her work touched many lives.

Active in civic affairs, she served as President of the Loudoun County League of Women Voters, moderating political debates, was appointed to the Loudoun County Social Services Board, and was named Outstanding Woman of the Year in Loudoun County in 1997. She loved literature and poetry, classical music and flowers, especially orchids.

She was predeceased by her husband of 50 years, Arthur Irving Kassoff, and her daughter Melannie Kassoff. She is survived by her two children, Dr. Elizabeth Holly Kassoff; and Andrew Edward Kassoff, his wife, Tamara, and three grandchildren, Grace Biyu Hunt-Kassoff, Cyril Alexander Kassoff, and Lukas Andreivich Kassoff. She had beloved nieces, nephews, and great-nieces; and great nephews scattered across the country.

Laurel was a member of the Religious Society of Friends (Quakers), and served as Clerk of the Goose Creek Meeting in Lincoln, Virginia. She was an active member of the Blacksburg Friends and a memorial service will be held for her there once it is safe to do so.