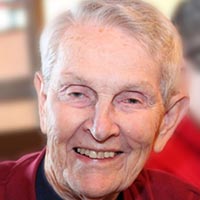 Bob and his wife of 54 years, Ann Lipsey Kane, who preceded him in death in 2010, came to Giles County in 1959. Following stints as reporter with The Kansas City Star and The Franklin News-Post, he realized a childhood dream of owning and running a small-town newspaper when he bought The Virginian-Leader in Pearisburg. He was publisher there until he retired in 1985.

He grew up in New Jersey and was a veteran of World War II. He enlisted in the U.S. Navy in March 1945, just before he turned 18 years old and served in the Pacific Theatre until he was discharged in 1946. He earned the American Theatre Medal, the Asiatic Pacific Medal and the Victory Medal.

He received a bachelor’s degree from Cornell University and studied law at Washington and Lee University. He passed the Virginia Bar exam after his second year and was editor of the Law Review. After graduation, he worked for a time at the Justice Department in Washington, DC. He met a girl from ‘Ole Miss on a blind date. They married in 1955 and they raised four children.

He was a newspaper man at heart. For most of his 25-year career, he was a one-man news operation. Providing county readers with their weekly slice of life was his goal. He covered town council meetings from Pembroke to Glen Lyn; county government, courts and breaking news. If it was news worthy, Bob was there.

Even those who disagreed with him found a forum in the paper. He believed the truth shall set you free; that given the right tools, readers could make up their own minds about the issues. His job was to present the facts with voices from all sides represented. He used the editorial page to advocated for Giles County and its people. Weekly messages appeared there reminding Governor Lynwood Holton of a campaign promise he made to push through funding to four-lane Route 100. Those didn’t stop until road improvements started. His reply to anyone who commented on what he did for the county was “Giles County has been good to us.”

Ever the reporter, even on vacation, he wrote pieces for his weekly column and when he and his son went on a five-week trek to Alaska, he sent back weekly dispatches about that trip. He had a generous spirit and a willing heart. Active in the community and the region, he served as chairman of the New River Valley Planning District commission; as a municipal judge for the town of Pearisburg. In the mid-60s, as President Lyndon B. Johnson’s “war on poverty” was ramping up, he was on an advisory board for the Office of Economic Opportunity. He was a member of the Kiwanis Club and the Pearisburg Presbyterian Church.

He and Ann traveled to Switzerland, Russia and Central America. When she slipped into Alzheimer’s Disease, he was her loving caregiver. He is survived by his son Thomas R. Kane, of Pearisburg, three daughters, Caroline Kane Kenna and her husband Michael R. Kenna, of Huntersville, N.C.; Rosalind Kane Zimmerman and Jessamine Kane–Wiseley and her husband Colin, all of Christiansburg; four grandsons, Mark Kane Zimmerman, Michael Patrick and his wife Marti W. Kenna, Mark Shannon Kenna, and his fiancé Lyndi Vince, and Robert Logan Kenna; four nieces, Kathleen Arey Carroll, Claire Bradley Ong, Ann Muse Murphy and Lynn Muse Godfrey and three nephews Stephen Edward Arey and his wife Judy, Jonathan Southard, and Wayne Muse and friends as close as family. Three nephews, Allan Arey, Patrick Arey and Mark Bradley preceded him in death as did his sisters Patricia Kane Arey and Kathleen “Chuck” Southard. Funeral will be held at 4 p.m. on Sunday March 10, 2019 at the Pearisburg Presbyterian Church, 114 Easley Street, Pearisburg with the Rev. Gary Alexander and the Rev. Steve Darr officiating. Graveside service will be on Monday March 11, at 10 a.m. at Birchlawn Burial Park in Pearisburg. The family will receive friends at Givens Funeral Home, 110 Woodrum Street, in Pearisburg on Saturday March 9, 2019 from 6 to 8 p.m. His pallbearers are: Bentley, Benji, Danny and Chris Ratcliffe, Mark Kane Zimmerman, Michael R., Patrick, Mark and Logan Kenna. In lieu of flowers we invite you to donate to Committee to Protect Journalists https://cpj.org/ or First Nations Development Institute https://www.firstnations.org/ or a charity of your choice. Online condolences can be sent to the family at givensfuneralhom.com.