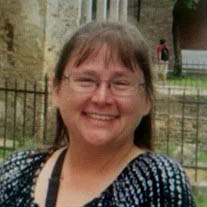 Christine Elizabeth Kaestle, known as Chris (or Chrissy to family and old friends), was born January 28, 1972 (Princeton, NJ) and died July 16, 2020 (Blacksburg, VA). She died suddenly and quickly of a heart attack after getting out bed in her beloved home of 14 years. Her 48.5 years with us on this Earth pushed the boundaries of human love, intellect, respectfulness, grace, endurance, adventure, and humor.

Christine is survived by her life companion of 30+ years Louis “Lou” Madsen (Blacksburg, VA), her mother Elizabeth “Liz” MacKenzie (New York City and S. Egremont, MA), father Carl Kaestle (Providence, RI and N. Egremont, MA), and sister Frederika “Rika” Kaestle (Bloomington, IN). She is also survived by her brother-in-law Lee Kruschke, step father William Rowen, and numerous aunts, uncles, cousins, inlaws and others (hundreds) who all loved her deeply and considered her a dear friend. She frequently and fearlessly challenged all around her to think more deeply, to acknowledge their privilege, and to work toward improving living conditions for all.

Her respect for all people and all beings was exceedingly strong, leading her, among other things, to be a lifelong vegetarian starting at age 19 and to vigorously fight for a host of women’s issues, as well as for anti-racism, and for issues of economic disparity and human inequity. When asked (frequently) why she became a vegetarian, she said simply “I want to decrease the amount of violence in my life.” She believed that all humans are essentially good and that our communities continually make progress toward equity over time, although backslides obviously occur. She was a committed, thoughtful, and respectful atheist, although she did not engage in religious/spiritual talk unless at the urging of others. She gracefully, brilliantly, and fearlessly confronted people of all opinions and of all power levels with arguments for why they should rethink their statements or ideas. Sometimes these interactions involved physical or professional danger, but she never wavered. Often people underestimated her strength and intellect due to her youthful appearance and warmth. Her dearest wish was to decrease the violence in the lives of people and beings everywhere, and she applied her immense intellect and logic skills as well as her sensitive communication skills to this goal every day. She was in substantial physical pain for approximately ¾ of her years, but never let it attenuate her dedication to her work, her friendships, and her respect and Love for all. She was an exceptional biological, statistical and social scientist, combining diverse quantitative and qualitative concepts into her work and her life perspectives.

She always met people with a strong focus and with a welcoming demeanor. Her huge smile inspired warmth, comfort, and friendship. These qualities enabled her to meaningfully connect with people, either for the first time or after many years of knowing her. She always considered a person’s life situation or opinions when interacting with them, and nearly all who interacted with her incorporated a new idea or felt better about themselves. If Chris disagreed with someone, she always approached the ensuing debate with care and grace in order to have a positive and productive discussion. Her ego was healthy and strong but she only employed it to help herself and everyone around her grow, and not to selfishly gain attention or advantage.
Christine grew up mostly in Madison, WI, with formative several-month stints in Princeton, NJ, Somerville, MA, Adelaide, Australia, and Palo Alto, CA. She deeply loved music in all forms, listening voraciously, playing valve trombone and euphonium in concert and jazz bands and singing in choruses. After graduating from Madison West High School in 1990, she attended Columbia University for 1 semester then moved to Grinnell College and graduated with a Biology BA in December of 1994. She lived in Pasadena and West LA, CA with Louis for 6 years, where she was first an environmental consultant for ICF Kaiser Inc. and the EPA, and then taught 7th grade science at Eliot Middle School in Pasadena while pursuing a Master’s degree in teaching at Claremont University. She discovered the field of public health in 1999 and excitedly found that one could make a living studying human sexuality, her deepest intellectual passion since around age 15. She attended UCLA School of Public Health and received a Master’s in Community Health Sciences in 2001, conducting and publishing research with Prof. Dorothy “Dotty” Wiley. She moved to UNC-Chapel Hill in 2001, where she worked with Prof. Carolyn Halpern and completed her Ph.D. in Maternal and Child Health with highest accolades in 2006. She joined the faculty in the Department of Human Development at Virginia Tech in 2006 and was promoted to Associate Professor in 2012 and to Full Professor in 2019. Christine made inspired and original contributions to our society with her scholarly research (> 50 publications), while deeply impacting her students, being both a caring but honest mentor and a thoughtful and devoted classroom teacher.

Her career (and nearly every venue of her life) focused on human sexuality and human equity. She developed new knowledge and synthesized new perspectives and arguments to combat old stereotypes, to fight physical and mental disease, and to improve happy and healthy sexuality. Most people knew her as being provocative and funny about sex, often telling titillating anecdotes at parties or meals, but her seriousness and dedication to this field was profound. She believed that sexuality is among the most pivotal and driving core human functions, and yet contributes to personal discomfort and shame, extreme societal power differentials, and outright violence and oppression for literally billions of our planet’s inhabitants. These burdens fall with dramatically more weight on females. Most humans find sexuality extremely hard to address with honesty, and the resulting dishonesty drives many of these negative outcomes (a public health word she loved).

She and Lou became close friends starting in 1988 at West High in the “Jazz West” band (Clyde Haberman, director) and as a result of studying for classes together, notably “Advanced Writing Workshop” (Bill Keys, teacher). Their first date (bowling with friends followed by cruising around in the blue 1968 Dodge Dart) was March 16, 1990 after a rehearsal for “Guys and Dolls” at West, for which they both played in the pit orchestra. After 5 years of absolute commitment and devotion to each other, they were married on Lake Monona in Madison on August 13, 1995. Their relationship grew steadily in intensity and changed continuously until her death, with each person experiencing their closest friendship, intense romantic and sexual Love, bird-like freedom to explore their interests, and constant intellectual stimulation. They lived together in Madison, WI, Grinnell, IA, Pasadena, CA, Chapel Hill, NC and Blacksburg, VA and experienced vigorous travels together to all continents, sometimes for weeks or months at a time (Wellington, New Zealand, Melbourne, Australia, Nepal and Thailand…). She was a true adventurer in every sense.

Due to the Coronavirus, an in-person service will not occur until later, perhaps on the 1 year anniversary of her death (July 16, 2021, details forthcoming). All are encouraged to gather soon in small groups or online to celebrate and remember her life. Her body was cremated in Blacksburg.

The family will happily accept cards, letters, and/or emails with memories and photos of Chris. Please do not send flowers or food or other material items.

If you would like to make donations in her honor, please contribute to one of these (her favorite) charities: