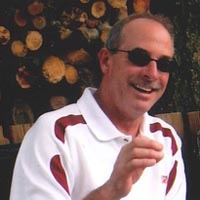 James Walden “Jimbo” Jordan, 63, of Radford, passed away Monday, August 10, 2015. He was the son of the late Judge William Southall and Marjorie Einstein Jordan.

Jimbo spent his whole life in Radford, graduating from Hargrave Military Academy and retiring from Volvo Trucks. He loved to cook and was an avid sports fan who usually watched two TV’s with split screens so he could see four sporting events at one time. He was a good friend and will be greatly missed by his many friends.

He was preceded in death by his parents, and brother, William S. Jordan, Jr.

Survivors include his sister and brother-in-law, Lee and Jim Slusher; brother and sister-in-law, Bob and Diana Jordan, all of Radford; 8 nieces and nephews; and his devoted “Third Street Gang”.

To celebrate Jimbo’s life, the family will gather with friends from 4 p.m. until 6 p.m. on Thursday, August 13, 2015 at the Mullins Funeral Home & Crematory. Graveside services will be private.

In lieu of flowers, the family requests that contributions be made to the Grace Episcopal Church, 210 4th Street, Radford, VA 24141 or to Good Samaritan Hospice, 1160 Moose Drive, NW, Christiansburg, VA 24073

The Jordan family is in the care of Mullins Funeral Home & Crematory in Radford.