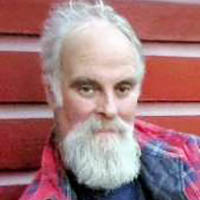 Mitchell James Jones, of Eggleston, formerly of Falls Church, VA, departed this life early August 13, 2020 at his home. Born July 11, 1959, he was a son of the late Theodore and Mary Louise Humpton Jones.

Mitch was a gentle and loving father, brother, son and friend. He carved works of art from wood and stone. He loved to fish from the New River to the ocean’s shore. He built and rode his own Harley Davidson from old parts as a young man. He was a wood chopping and butterfly stroke champion. He sowed massive gardens and grew prize winning tomatoes. He raised his children to be sensitive, strong, curious, and resilient and will always be missed and remembered. He was a graphic printer by trade and was a Member of the American Legion, Falls Church, VA, Post 130. There was nobody like him.

He is preceded in death by his parents.