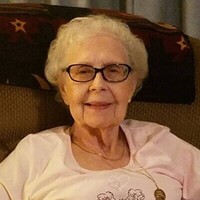 A private graveside service for the family of Mrs. Mary Doris Cantrell Jones, 88, of Dublin, Virginia, formerly of Anniston, Alabama will be held at Forestlawn Gardens in Golden Springs, Alabama. Mrs. Mary Jones passed away on Monday, September 28, 2020, at Highland Ridge Rehab in Dublin, Virginia.

Mrs. Jones became a Christian at the age of 13. She was a member of the First Baptist Church of DeArmanville and Harmony Baptist Church. She was most recently a member of Dublin Baptist Church in Dublin, VA. She enjoyed being a housewife, and was happiest taking care of her family. She was an awesome cook and baker. Mrs. Jones was a lifelong resident of Southern California until she and her husband returned to Alabama in 1985.

In lieu of flowers, memorials may be made to the American Lung Association of Alabama, 55 W. Wacker Drive, Suite 1150, Chicago, IL 60601 (www.lung.org) in memory of her late husband, Roy V. Jones.

The family would like to recognize Wanda Rankin for being a caregiver to our mother for two years in Alabama.

Online condolences may be made to the family at www.klbrownmemorychapel.com. or www.bowerfuneralhome.com