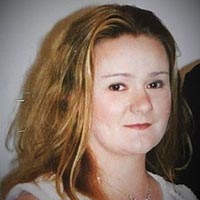 Kathy Alta Broyles Jones passed from this life Wednesday, February 10, 2016, at the Narrows Livestock Market of a heart aneurysm. She was born August 30, 1980, to Linda Kay Shafer Broyles and the late Dewey Herbert Broyles. She grew up on Curve Valley Farm located near Assurance, W.Va., which she was operating with her mom, brothers and their families.

Kathy was a 1998 graduate of James Monroe High School being a part of the first class to attend all 4 years at the school located on property formerly belonging to her family. She earned an associate degree in 2001 from Mountain State University as a legal, administrative and medical secretary. Kathy was working as a secretary for Semco in Narrows, and had been employed as the scale/sale clerk at the Narrows Livestock Market for 16 years. She had just been hired as the office manager prior to death.

Kathy faithfully attended the Spruce Run Church of the Brethren where she served as the Sunday School Secretary/Treasurer, youth Treasurer and in any other capacity where she was needed.

Kathy attained the American FFA degree surpassing her father and brothers’ accomplishment by being the State Star Farmer. She served as the South Eastern District Vice President for the WV FFA Association. She had been a member of the New Pioneer 4H club in Peterstown, W.Va. She placed third in the national 4H Lawn and Garden Tractor driving competition and was a member of the Monroe County 4H All Stars. Kathy had a gift for and enjoyed working with people and was liked by all who knew her. She had a passion and a huge collection of all things Frogs!!

In addition to her father she was preceded in death by her grandparents, Marshall Claude and Evelyn Cathleen Springston Shafer; and Herbert and Minnie Alta Halstead Broyles. Kathy also farmed with her husband, Paul Jones who survives her at Elgood.

In addition to her husband and mother; she is survived by brothers, Dewey Vergal Broyles, his wife, Iwona and their children, David, Jairus, Ania and Abigail; Stephen Claude Broyles, his wife, Lorrie and their children, Caleb, Natalie, Eli, Isaac and Luke all of Lindside W.Va.; step-daughter, Tiffany O’Sullivan, her husband, Sean, and their children, Erin, Ireland, Michael and Conor; mother-in-law, Virginia Jones Henthorn all of Athens, W.Va.; brother-in-law, Robert C. Jones Jr. and wife, Paula of Hancock; sisters-in-law, Linda Alvis and husband, Dirk of Athens, W.Va.; Paula Best and husband, Howard of Christiansburg; puppy, Rickie; quiet a few feline friends and a huge family of aunts, uncles, cousins and friends too numerous to mention.The family will receive friends Sunday, February 14, 2016, at the Wickline Funeral Home in Lindside from 5 to 9 p.m.