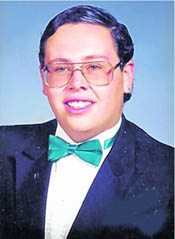 Ronald Eugene Jones Jr., of Narrows, passed away suddenly on Saturday, May 17, 2014 at Carilion Giles Community Hospital in Pearisburg. He was born in Pearisburg on September 30, 1976. He graduated from Narrows High School in 1996 and was a devoted Narrows Green Wave fan. He was preceded in death by his grandparents, Hubert and Olivia Jones, and Bill and Beulah Bailey; and a very special uncle, Richard McNeil.

Ronnie (Eugene) is survived by his two precious sons, whom he was raising by himself as a single parent, Dakoto (age 2) and Dominic (age 4). He loved his sons more than life, and did everything he could for them. His sons loved him dearly. Also surviving are his father, Ronald (Poochie) Jones; and his brother, Rick, both of Narrows; his mother, Patty Bailey of Pearisburg; his aunt, Norma McNeil of Roanoke, whom he loved as his second mother; his uncle Bud and aunt Sue Jones of Pembroke; uncle James and Eileen Jones of Narrows, aunt Joyce and Jimmy Purdy of Indiana; aunt Brenda and Wade Witt of Pearisburg; aunt Vickie and Bobby Snider of Ripplemead; a very special cousin, Walter Lee Jones; and many other cousins and family members; special friends Bud and Sheena Walker and children; and so many other friends too numerous to mention.

Because of his outgoing personality and genuine character, everyone loved Eugene dearly. He will be dearly missed, not only by his sons and immediate family, but by his many friends who loved him as a brother. He touched so many lives in his 37 years on this earth.