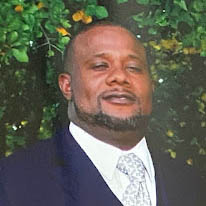 George “Chris” Jones, son of George W. Jones and the late Ruth Crowell was born on December 4, 1968 in Richmond, Virginia. After fighting a good fight, he departed this life on Friday, June 10, 2022 at Carilion Roanoke Memorial Hospital.

As a native and resident of Richmond, Virginia for the majority of his life, Chris attended Richmond public schools and was a graduate of John F. Kennedy High School of Richmond, Virginia. He pursued a further education at J. Sargeant Reynolds Community College and was a tenured employee at Canatal Steel as a mechanic.

With courage and tenacity, he served his country in the United States Navy. The essence of his Christian life was established at a young age at Bethlehem Baptist Church in Richmond Virginia. Following the pastoral path of his late mother who was a former pastor, Chris faithfully contributed to the missions and ministries of Little River Missionary Baptist Church, serving as the Associate Pastor. As he was pursing his pastoral trajectory, Chris was attending seminary school at Richmond Virginia Seminary and Eastern Theological Seminary.

Chris was a jack-of-all-trades and he could fix literally anything. He was known as “The Handyman” or “Mr. Mechanic”. His other loves and interests were hunting, fishing, racing, football, traveling, camping, spending time with family and friends, motorcycles, working with dogs, and mentoring and helping others. He indeed leaves a legacy of love and kind deeds for all of us to cherish forever. We are so thankful to God for his treasured life and precious memories.

Today, Chris is reunited with his mother, Ruth Crowell; brother, Devon Jones; maternal and paternal grandparents and other family members and friends who preceded him in death.

Funeral services will be held at 11:00 a.m. on Saturday, June 18, 2022 at the Little River Missionary Baptist Church with Rev. Clinton Crump, Rev. Jerome Barnes, Rev. Walter Lawson, and Rev. James Clayborn officiating. Interment will follow in the Little River Cemetery with Military Rites by Floyd VFW Post # 7854 and American Legion Post # 127. The family will receive friends from 6 p.m. until 8 p.m. on Friday, June 17, 2022 in the Maberry Funeral Home Chapel.