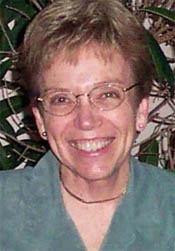 Dorothy Huffington Jones, age 80, of Blacksburg died Saturday, March 29, 2014 at her home. She was born in Normal, Illinois on May 25, 1933 to the late Bernard and Edith Koepke Huffington and was also preceded in death by her husband Philip Robert Jones in 1994.With the love of family and friends, oncologist Dennis Scribner, M.D. and his healthcare team, but most of all her indomitable spirit, Dorothy beat the odds surviving and thriving for five joyful years following a stage four ovarian cancer diagnosis. She lived fully and with gratitude each and every day, surgeries and forty seven chemo treatments never daunting her will to live.

Growing up in Normal, Illinois with her nine sisters and brothers born from 1927 to 1943, she lived across the street from Eugene Field Elementary School, attended Central Junior High and Normal Community High School graduating in 1951 where she was a dedicated student, president of her class, and editor of the school newspaper and yearbook.

Following marriage in 1954 to her high school sweetheart Phil, the couple moved to Champaign, Illinois where Phil taught special education in the public schools and Dorothy was a bookkeeper for an accounting firm until the birth of their first child, Valerie.

In 1969, Dorothy, Phil and family moved to Bloomington, Indiana where Phil was a Professor of Education and Dorothy was a busy mother of their two girls. The Joneses moved to Madison, Wisconsin in 1976 where Phil served a year as Assistant State Superintendent of Education. Phil and Dorothy returned to university life in 1977 at Virginia Tech in Blacksburg, Virginia where Phil continued as a Professor of Education influencing special education public law and policy. Dorothy served as a surrogate mother to and event planner for his many doctoral students.

Dorothy is survived by her two daughters and sons-in-law, Diana Jones-Cox and Carl “Raymond” Cox of Christiansburg, and Valerie A. Jones and Christopher W. Naughton of Virginia Beach. For the last ten years, she was blessed with the steadfast companionship and love of Gordon D. King of Blacksburg. Dorothy enjoyed being the grandmother of David Andrew “Andy” Ostroth, Danielle “Dani” Phyllis Hall and step granddaughter, Julie Marie Cox Vittoriano. Dorothy was very close to the King family, including Tom King, his close friend Sally Paulson, and his children Telia and Thomas; Douglas King and his partner Yung Le Kaechele, and John King. She is also survived by three sisters and brothers-in-law, Mildred and John Ullian of Joliet, Illinois, Deloris Jean Alsman of Normal, Illinois, Linda Kay and Roger Otto of Hudson, Illinois; one brother and sister-in-law, Richard Lynn and Martha Huffington of Minier, Illinois and numerous nieces and nephews. She was predeceased by three sisters, Betty Louis Berglin, Mary Evelyn Huffington, Lucille Mae Huffington Fenis; and two brothers, Bernard Franklin Huffington and Edward Warren Huffington.

The family thanks “Team Dorothy” comprised of family and friends including Sharen and John Hillison, Carla Schwertz, the “No Name Dames” social group, and many others who supported and celebrated her life with her. A very special thanks to nurse Heather Hurd and the amazing team at Good Samaritan Hospice, certified nursing assistant Luba Levina and others who cared for Dorothy.