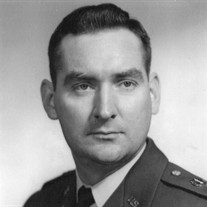 He was born in Coaldale WV, on November 18, 1928, the son of Mr. and Mrs. Theodore R. Jones. He was preceded in death by his parents, his wife (Elizabeth Cromer Jones) and by one son (David Austin Jones).

His father worked for the Norfolk and Western Railroad and was stationed in West Virginia when David was born. At age eleven his family moved to Christiansburg. David graduated from Christiansburg High School in 1945. A member of the Cadet Corps and ROTC, he graduated from Virginia Polytechnic Institute, class of 1949. He married his college sweetheart, Elizabeth Louise Cromer, in August 1949.

After graduation he was called into service for the Korean War, which he spent training new recruits at Fort Bliss, Texas. After the armistice, he briefly worked at his father-in-law’s furniture store before rejoining the Army. He was stationed in Germany and later at VPI as an ROTC instructor. In 1961 he volunteered for assignment to Korea. He liked the country and took classes in Korean language and culture while there. He earned his Masters in Business Education from the University of Maryland extension program also in Korea. In 1965 he was appointed to the Army General Staff (Ordinance). In 1967 he was deployed to VietNam where he served with the First Logistical Command. The highlight of his career came in 1970-1972 when he served as Chief of Maintenance (III Corps) at Fort Hood, Texas. He retired from active duty in 1975.

He was awarded the Legion of Merit, the Bronze Star, and he Meritorious Service medal (w/ Oak Leaf Clusters) among others.

After his military retirement, David continued his service to national defense as a civil servant at the US Army Materiel Command in Alexandria. He retired from the civil service in 1995 whereupon he moved with his wife to the Charlottesville area.